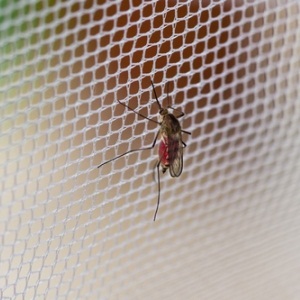 Recent press coverage of research that is testing antimalarials as a means of treating nets has caused much interest.

Atovaquone is an antiparasitic drug that is used along with Proguanil to make up the antimalarial known as Malarone, a popular antimalarial often prescribed for travellers from the United States who are going into malaria-endemic areas.

The researchers who are mentioned in this article used Atovaquone as a surface coating and then live mosquitoes were placed on that surface for six minutes. (The typical estimated time a mosquito rests on a net.) The drug entered the mosquitoes body through its legs and malaria parasites that were inside the mosquitoes died or were blocked. The mosquitoes remained living.

“We showed that the development of P. falciparum can be rapidly and completely blocked when female Anopheles gambiae mosquitoes take up low concentrations of specific antimalarials from treated surfaces—conditions that simulate contact with a bed net,”

Interesting research but I have a few questions.

This is definitely a step in the right direction but more work needs to be done before we get too excited about it.